Adopted from Operation Kindness on October 27, 2016

Their (the human's) story

We started auditioning cats. The goal was a small white medium haired girl cat with blue eyes. A cuddle-bug.

To give away the ending, that's not what we ended up with - the cats get to vote too.

Starting with PetFinder, we looked at lots of cat pictures. There were several contenders.

Thursday night we visited Operation Kindness. While they didn't have the goal cat, there were a couple of very nice cats.

The adoption counselor, hearing about our 1 boy and 2 girls suggested a 2nd boy instead of a 3rd girl, as 2+2 is usually more stable.

There was a 2 year old Orange long haired tabby. His shelter name was Markey, but he really should have been called Mr. Mellow. it was only when I tried to remove a couple of matts under his chin with a brush that he decided I was getting too personal for a first date and he smacked at me with claws. But that was an extreme provocation. 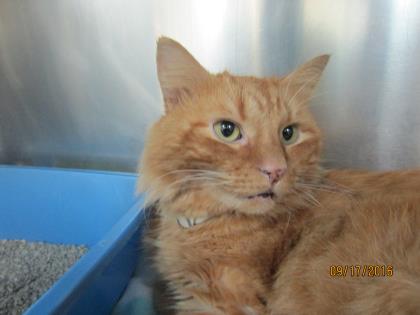 In general, the free range cat room and associated catio is a stressful place. Cats jostle for dominance and territory, all disturbed by the comings and goings of volunteers, staff and potential cat parents. The little gated off side areas of the catio - for interactions with potential parents and volunteer/staff use are subject to intense interest by the cats. (Hey, what does HE have that I don't?) Markey just sat there snoozing happily. We suppose, if pressed, he would reveal his full 10 pound long hair glory. But why bother? I'm sleeping here!

There was also a small short hair white male called Cabot (silly name) who was still being quarantined until his course of medication for his upper respiratory infection completed the next day. He had only been at OC for three weeks and most of that was in his spacious cage for quarantine. We spent a little time with him on the catio, but mostly he hid in the litterbox.

Friday we visited the Lewisville Animal Shelter to meet Coconut, a small white medium haired girl cat with blue eyes. When we arrived she was in the room with a similar sized short hair male, Him and Boo, a two year old short haired white cat. Boo was nice, but very skitish as Coconut was the boss - clearly a witch with a b. Him, at 2 years old could hold is own against Coconut but really didn't want to bother. Coconut also was bitey towards humans and used her claws too much - which had us worried about the current fur herd. So back to Operation Kindness...

Markey was in his usual space, happily snoozing. He'd gotten one matt out and Ms. Good Nails easily removed the other just scriching him. Cat heaven. The only problem with Markey was he was too laid back. We wanted a cat who would do more than snooze all day. He really needs - and this is a terrible stereotype - a little old lady who needs somebody to talk to. We hope he found her.

So they brought Cabot out to the catio and he was much more confident this time. A little lap sitting, some reading time with him pressed against my leg and the decision was made.

However, Cabot - all deference to the Bostonians and such - is a silly name. So we've named him as befits a proper polar explorer.

I got picked up as a stray cat. They tell me that was on the 6th of October, but I'm a cat, we don't wear watches nor consult calendars. Stuffed into a cage - although nobody bothered me and I could eat my food in peace, so it wasn't the worst joint I spent time in.

Nobody knows where I came from. Nobody knows how long I was on the streets and brother, I'm not telling. Deal with it - you're going to get my story the way I tell it or not at all.

Next day I got poked and proded and some sleepy time and when I woke up, something was a little different. Not sure what. I think I was wearing a collar of some kind, but I sort of napped through the next few days. Altered, altered states, who knows?

About ten days in (and hey, Warden, don't I get a phone call and get told how long I'm in for?) I got sent to sick call. A little sniffles. Like that's going to slow a guy like me down? But they're stuffing pills down my throat and telling me I'm in solitary for 10 days.

Day 9 - not that I'm keeping track or anything - I get grabbed out of the cage and stuck into some bigger cage with two people (strangers) and a screw. Momma didn't raise no stool-pigeon, I ain't gonna talk, so I just hid. The two people left and the screw tried to dump me back in the hole. I put up a fight - just this side of getting sent to real solitary you realize, but I wasn't going to give in and just go. A fellow has to have some standards.

Day 10 - OK, I'm cleared to back to general population tomorrow. Wheee... I'm just going to keep my nose clean, serve my sentence and be done with this place.

Wait a sec, it's like almost closing time and they're sticking me back in the catio with two strangers and TWO screws. Actually, I think these were the people from yesterday. Maybe they are my lawyers? And so I should talk to them? So I tried telling them my story. Fell on deaf ears. Whoever these people are, they don't speak my kind of cat.

The lady picked me up (a little personal on a second date?) and started patting me in her lap. I could kind of grow to like this, but I'm a little short on cash to pay the legal fees here...

After that I go wandering around and get a little too close to the wire. The boss-lady's enforcer, Joplin, makes a dash at the wire. And the male two-legs turns on him and snarls. Let's revise our thoughts here, that's not a human, it's actually 190# of cat faking being a human. Told Joplin a thing or six. In words we ALL speak.

After a while the lady and man have a conversation of sorts. About half of this isn't actually in words. But the lady leaves.

I try and end-around the man's back - he's staring at his phone, completely absorbed (I though). I get as far as sneaking past his leg when a hand grabs me. Holds my shoulder and strokes my side. Kinda nice. So I settle in for a spell.

The lady comes back with a carrier box. This could get interesting - or it could end badly - after all that's how I started my sentence - in a box. The screws ask a question and the man says no and before I know it, I'm half way into the box. I turn around to hop out and they both say "Tail too, please". And the door closes.

I get whisked away to the back and they do a quick once over. Trim my claws - I'll have to work to get those shivs back before I end up in gen-pop. Back into the box. And they take me to a new room... one I've never been in before. Me, a couple screws and the two people. This could get very interesting.

A long time later - a couple cat naps at least - they pick up the box (with me in it and please don't swing it around so much) and next thing you know I'm outside the catio. Then they put me in some kind of box holder and turn on some kind of rumbling thing and start shaking everything. So I started to complain a little, and the shaking still goes on and on - no matter what I said, nothing got through. Told you they don't speak cat. After 4 thousand 500 minutes (or 45 as humans tell time), the shaking stops. The box is removed from the box and I get whisked into a new jail. Didn't really get to see much as I was holding on for dear life. The door opens and I'm in a new cell. About 5x7, with some kind of metal thing and some other stuff. So much for being lawyers, they are just different kind of COs. I wonder if I'm being transfered to the Feds from County lock-up or something. Still no word on my crimes, other than simple vagrancy.

However, they bring in a water dish, some cat food (finally) and a litter box. So it's my new cell. But there's also a couple towels for a soft bed. So it's not hard time. They turn off the lights leave me to sleep.

Ha ha. As soon as the foot steps faded away, I was exploring every nook and cranny of the cell. No easy ways out, I'll have to think about how to break out after a nap. Good thing, both of the COs came in to check up on me a couple times during the night.

Woke up Friday and it wasn't a dream - still in the 5x7 cell. The male comes in and - first rule of a new jail, make nice to the COs - so I did the rub thing and lay down on his leg for a while.

Later... the female CO comes in and opens the cell door. So after a little bit, I dash out. Maybe it's my breakout? Nah, but this is a much nicer cell. Larger. Has a couple soft places to nap, some hidden passages and even a window so I can at least see daylight. Guess I'm stuck here for a while... maybe I can find a pigeon and get word out...

Two meals a day - a bit short, but still... and definitely nice places to sleep. I've got a couple of hiding spots and a couple of things to keep me busy. Chewing the eyes off that fleece bug thing seems to be a lifer kind of project.

The nights are kind of lonely - at least in the original jail I could yell things at the other inmates. However, a couple of nights one of the jailers has come in and joined me on the bed. Except for insisting on the patting thing, it's alright. If they do it too much I chew on their fingers. Like "No bite" is going to stop me.

I did get one trip throughout the rest of the jail. It's a big place. Smells like there are several other inmates, but I didn't see them during my visit. Looks pretty standard - a lunch room, some sandboxes, beds. But kind of spread out.

The male screw trimmed my shives. I had finally gotten the left front leftmost claw decently sharp. I tried to escape and he's fast. Back to work with the scratching post.

They setup some kind of viewing screen, with a plastic window and little holes in the rest of the wall. So I've at least seen the other inmates. Well 2 of the 3 and I've smelled the 3rd.

There's a big grey guy - he started out hissing at me, but he's also yecked a few nicer words. A BIG white thing... she's been in to see me twice - I wonder if she's really the prison shrink. But all she's done is hiss and swipe. I might have caught a glimpse of the third one, ghosting by, but I'm not sure. If it did, it was just a black shadow passing.

Still no word on my sentence - guess it's just one day at a time.